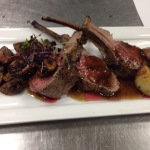 Go Ahead and Eat a Little Lamb

Lately I’ve been writing about healthy eating and although I did go on about chicken soup, it seems to me I may have skewered vegetarian. (Not that there’s anything wrong about that!) But as a kosher caterer, I like to eat meat; I just happen to be choosier about what ones pass muster at Mitzuyan Kosher Catering. Lamb is one of my favorite meats. and I’ve made it the undisputed star of our Mediterranean menu.

Is Lamb the Original Kosher Meat?

You have to wonder if lamb is the original kosher meat. The Hebrews sacrificed lambs and goats. The most notable exception was Abraham’s sacrificing a ram instead of Isacc. It’s worth noting that GD sent that ram, and rams are the grownup versions of male lambs. Sacrificing a grown animal instead of an immature one may also symbolize that Isaac was just a child himself.

I like to think that GD considered sacrificing a lamb as wasting food. No one eats ram. The sacrifice itself had nothing to do with kosher—the laws had not yet been set out in Abraham’s time. They come much later in the Five Books, in Leviticus and Deuteronomy. The prohibition against eating certain animals apparently has no foundation in health, either, according to Jewfaq. It seems to be “because it’s in the Torah” or maybe GD wanted the Hebrews to be different than the surrounding cultures, who pretty much ate whatever was around and palatable.

There’s evidence that civilization around the time of the earliest Hebrews—the followers and descendants of Abraham—ate very little meat anyway because livestock were difficult to maintain. Meat was eaten only when there was something big to celebrate like a wedding. Some of the lucky ones got to eat meat left over after sacrifices, which were often, in fact, lamb and goat. I found this fascinating article about the early Jews’ diet from Haaretz. So GD not only spared Isaac but wasted food.

Lamb is Healthier Than Other Red Meats

Now that we’ve established that eating lamb (and goat) is as old as Genesis, let’s consider its value versus more common red meat from cows.

Jewish kashrut laws command us to be kind to animals and as it turns out, lambs are generally better-treated than their bovine counterparts raised for our foodchain. According to TakePart, the digital division of Participant Media, lamb is probably a lot healthier to eat than other animals. More of them live their entire lives on a farm eating grass and hay. It’s also the meat staple in the healthy Mediterranean diet.

When you buy lamb, try to ensure that the cut is from a grass-fed animal. A properly fed young lamb feeding on grass will have more omega 3 fats (the healthy ones) than conventional ones that spend the end of their lives eating grains, according to The George Mateljan Foundation for The World’s Healthiest Foods. Grass-fed lamb also have good levels zinc and the antioxidant selenium, several B vitamins, and folate.

A Little Lamb Makes for Some Good Sliders!

If you want to restrict your intake of red meat but also want the protein it brings, consider cooking up a little lamb. Try this recipe for lamb sliders with chutney from FullCircle to get a small amount, just enough for a good taste.

Toss apples in bowl with all ingredients except cranberries.

Roast the mixture for 40-60 minutes. Stir occasionally until apples are brown and soften and release juices.

Remove from oven and mix in cranberries.

Continue roasting until cranberries soften and remaining liquid is reduced. This should take 15-2- minutes.

Mix lamb, onion, garlic, mint, and sage in a bowl. Cover with plastic wrap and let it rest to room temperature.

Form into 16 small patties. Grill until brown on one side, about 3-4 minutes. Turn and repeat. Season with salt and pepper.

After cooking, set aside on a plate and tent loosely under foil.

Serve on toasted buns. Add Dijon and a dollop of chutney.